Press Release: On The 50th Anniversary Of The Misuse Of Drugs Act, Cross-Party MPs Demand Reform Of UK Drug Laws 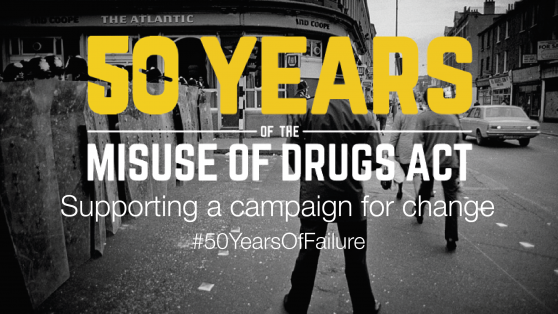 27th May 2021 marks 50 years since the UK’s Misuse of Drugs Act 1971 received Royal Assent. This pivotal anniversary has spurred charities, senior scientists, ex-police, public health specialists, bereaved family members, and over 50 MPs and Peers from all parties to sign a statement calling for the Government to urgently review the Misuse of Drugs Act.

“The Misuse of Drugs Act (1971) is not fit for purpose. For 50 years, it has failed to reduce drug consumption. Instead it has increased harm, damaged public health and exacerbated social inequalities. Change cannot be delayed any longer. We need reform and new legislation to ensure that future drug policy protects human rights, promotes public health and ensures social justice.”

According to the latest Home Office review, the annual cost of drug enforcement in England alone is £1.4 billion yet the UK currently has one of the highest drug-related deaths rates in Europe.

New data analysis by leading drug reform charity, Transform Drug Policy Foundation shows that since 1971, the Misuse of Drugs Act, or the ‘War on Drugs’ has failed to reduce harms or protect people (Full data analysis and sources available on request).

In England and Wales alone:

MPs from across the political spectrum are making the case for reform, and highlighting the failure of  the Misuse of Drugs Act to fulfil its primary purpose of protecting UK citizens against the harms of drugs:

“The Misuse of Drugs Act is hopelessly outdated and in need of urgent reform and change. Drugs policy should no longer be seen through the narrow prism of the criminal justice system but as a health issue, so that we can ensure those with drug dependence can get better access to the help and support they need.” - Dr Dan Poulter MP (Conservatives)

“The Misuse of Drugs Act was supposed to eradicate drug use, reduce harm, and keep people safe. But since 1971, drug use has risen dramatically in the UK, decent people have been needlessly criminalised and had their lives destroyed, those struggling with addictions have been stigmatised and punished, thousands of children have fallen victim to trafficking and exploitation at the hands of criminal gangs, and we are in the midst of a devastating drug-related deaths crisis.” - Jeff Smith MP (Labour)

The All-Party Parliamentary Group on Drug Policy and the Cross Party Group on Alcohol, Drugs and Justice will meet on 26th May to mark the 50 year anniversary and discuss options for reform. An Early Day Motion has been tabled to coincide with the meeting calling on Government to be led by the science, and recognise the overwhelming evidence that the current system is not working.

People who have been personally bereaved are also speaking out. Members of the Anyone’s Child campaign are adding their voices to the call for urgent reform:

“I lost my two sons on the same night after they took ecstasy of unknown purity and strength. It’s time to accept drug use exists across society and find ways to make it safer. Why does the government ignore the evidence?” - Ray Lakeman (Member of Anyone’s Child: Families for Safer Drug Control)

Transform Drug Policy Foundation, Release, DrugScience, Law Enforcement Action Partnership and family members of the Anyone’s Child campaign are leading a coalition of civil society organisations calling for an urgent review and meaningful debate on the effectiveness of the current approach:

“The whole purpose of the Act was to create drug policy based on evidence. That goal has never been realised, which is reason enough for a review.” - Professor David Nutt (Imperial College London)

“The Misuse of Drugs Act has been a disaster. In the 50 years since it was introduced, we have seen both use and deaths rise dramatically. The UK now has the highest drug deaths in Europe, and the situation continues to get worse. The Government’s recent review of drug markets sets out this failure in detail, and confirms that it cannot be resolved simply through more policing. We need to start a debate now to finally break the deadlock.” - Dr James Nicholls, (Chief Executive Officer, Transform Drug Policy)

“After 50 years of failure, we need urgent reform of our drugs policy. The current criminal justice approach has resulted in hundreds of thousands of (mainly) young people being criminalised, has disproportionately impacted on Black and minority communities and those living in deprived areas, and has contributed to tens of thousands of drug-related deaths. It is time for reform in order to save lives and protect our young people." - Niamh Eastwood (Executive Director of Release UK)

For more information on the “50 Years of the Misuse of Drugs Act: Time for Change” campaign visit: transformdrugs.org