5 Things You Need to Know About UK Drug Policy

Variations of this line have without fail been the Home Office’s go to statement in recent years when questioned on the efficacy of its drug policies. More often than not, it is defiantly accompanied with quotes that suggest to the general public: “Because drug use is falling, our drug policy is working.”

Perversely, the above December 2016 quote comprised part of the Home Office’s refusal to accept Advisory Council on the Misuse of Drugs (ACMD) recommendations to combat the rising rate of opioid-related deaths through improving drug treatment and harm reduction services. How a fall in drug use is relevant when drug deaths are skyrocketing is simply beyond comprehension.

Ultimately, the prevalence of drug use is a terrible measure of whether a country’s drug policy is successful or not. Yet, governments the world over are obsessed with utilising this as the sole metric, blindly ignoring in the process the immense harm their punitive policies are causing to societies. 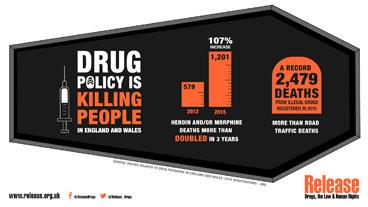 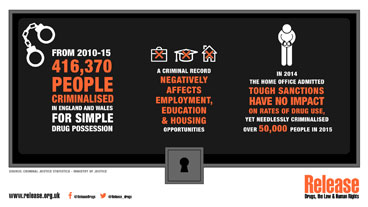 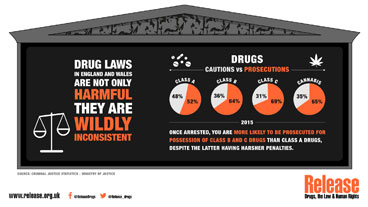 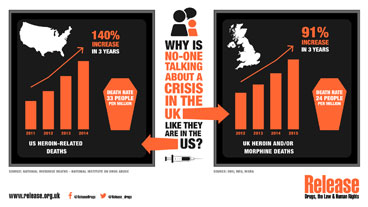 This year will see the UK government release its long-awaited new drug strategy. Any hint of a break with the history and willingness to learn from past errors, though, will be severely lacking, according to reports. Ideology it seems will once again outweigh evidence and good public policy.

In light of this impending continuation of failure, we thought it would be helpful to outline some of the damage wrought by UK drug policies in recent years - from over 400,000 people criminalised for non-violent drug possession and the police resources wasted on drugs stop and searches, to the all-time high in drug-related deaths.

These infographics are just a snapshot of the UK drug policy’s most egregious shortcomings. Sadly, with the Home Office’s fixation on drug use levels as a measure of success and refusal to accept the evidence for drug law reform, these significant societal harms will not be diminishing anytime soon.