Khat: Update- Ban to be implemented on the 24th of June 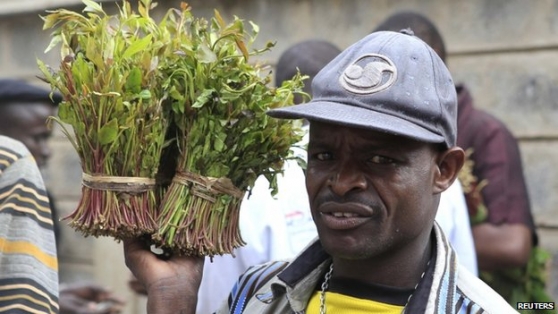 From 24th June 2014 Khat will become a Class C drug. Following the House of Commons vote in March approving the Home Secretary’s decision to ban Khat, the outcry that came from large sections of the Yemeni and Somali communities has been ignored as the government has pressed ahead with what we, at Release, have called a failed solution to a non-existent problem. With only 0.2% of the general population of the UK using Khat and with the negative consequences that often follow attempts to ban already popular drugs, we must question why the government are persevering with this policy despite the evidence that it is a bad idea.

The fallout from this misguided policy has already begun, and it goes beyond the borders of the UK. Last month in Kenya, a group of MPs said they will table a motion in parliament to have British farmers ejected from the Khat-growing Meru region, in response to the decision by the British government to ban the use of the stimulant. Also, former Kenyan Prime Minister and current opposition leader Raila Odinga confirmed last week he has sent an appeal to British Prime Minister David Cameron regarding the Khat ban. Odinga is asking for the ban to be delayed by at least one year. This would allow for plans to be drawn up to address the gap that the ban will create in the economy of the greater Meru region. While Odinga would prefer for Khat not to be banned, he recognises that if the ban is imposed, the consequences be serious and time is needed to prepare for them. This is a fact that has escaped the attention of the UK Home Office, whose Khat fact sheet contains much information about what the punishments will be for anyone caught in possession of the drug, but little advice about what is to fill the economic and social hole that will be left by the ban of Khat for Yemeni and Somali communities. It seems that once again, Britain’s drug policy is showing its default position to be the punishment for those already at the margins of society, at both the domestic and international level.