National Overdose Awareness and Naloxone campaign launches in the UK 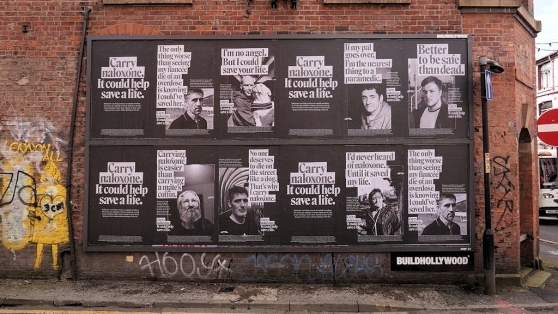 A new national Overdose Awareness and Naloxone campaign – thought to be the first of its kind – has launched this week to highlight the importance of carrying life-saving medication to prevent fatal opiate overdose, with such deaths accounting for half of all drug-related deaths in England and Wales alone.

A national Overdose Awareness and Naloxone campaign launched this week across cities in the UK to highlight the importance of understanding overdose risks, and making this life-saving medication available to anyone likely to witness or suffer an opiate overdose.

This unique campaign features the images of people who themselves have all been personally affected by overdose, and who have been trained in overdose prevention and now carry naloxone. This is thought to be the first national campaign of its kind, and as such, challenges the stigmatizing lens that people who use opiates are often viewed through, which often leads to discrimination and prejudice.

Educating the public on signs of overdose and the correct use of naloxone and encouraging more people to carry this medication is vital as drug-related deaths continue to soar in the UK, with the highest recorded deaths for the eighth year in a row. Many of these deaths are due to fatal opiate overdose - the type of death that naloxone can prevent. The most recent figures for England and Wales indicate that opiates, like heroin and morphine, were involved in half (49%) of all drug poisoning deaths registered in 2019. This figure increases to 62% of all drug poisoning deaths when we exclude death certificates that did not record drug type. Whilst drug-related deaths have been increasing year on year since 2013, and as the purity (strength) of opiates, namely heroin, reached a 10-year high, government figures show a corresponding 27% reduction in spending on drug treatment services for adults since 2015/16.

Release, the national centre for drugs and drug law, has previously conducted research highlighting the limited availabilityof naloxone in the UK, and have advocated for wider provision. Release welcomes this campaign, with their Executive Director, Niamh Eastwood, commenting, “This campaign places people who use drugs at its core. It is their experiences of seeing their friends and loved ones die from opiate overdoses, deaths that could be prevented, that make it so powerful. The UK has a shameful record in protecting the lives of people who use drugs, with a third of all overdose deaths in Europe occurring in this country. At the very least, widescale availability of naloxone and public education on the use of this medication should be at the cornerstone of any response.”

The campaign launched this week with billboard pictures of people who have chosen to share their personal experiences about overdose and naloxone, and uses direct quotes from them with the hope of encouraging and engaging the broader public on this important subject. The billboards are located across London and Manchester, with further locations set to feature the campaign in the coming weeks.

The campaign being co-produced with people who use drugs, either currently or in the past, and who may have been at risk of overdose themselves, is a key and unique aspect of the campaign. Lee Collingham, who is featured in the poster campaign, describes the reasons for his involvement, “The whole reason I got involved with this campaign is not just because I've been advocating for the golden bullet in fatal-overdose prevention that is naloxone for the last decade, but also because the campaign itself is educational and informs the general public, people who use drugs, and professionals alike, that something as simple as phoning an ambulance or doing chest compressions can make a world of difference."

Collingham continues "My hope is that people not only seek out naloxone for themselves, but that everyone learns more about how to save a life. People should phone for an ambulance if they think that someone is overdosing, instead of the police, and people can seek free training - which takes as little as 20 minutes - to learn how to save a life themselves".

Niamh Eastwood goes on to say, “What this campaign demonstrates beautifully through its anti-stigma approach, is the human face of people with lived experience. It is this humanity that is often ignored by politicians, the media and other agencies who seek to dehumanise and ‘other’ this vulnerable population, and this allows for their lives to be seen as expendable. This has to end - we must recognise that stigma kills.”

The campaign is funded by Ethypharm and produced by the Agency Havas Lynx who worked directly with the participants in the campaign, with Release as proud communication partners.

TalkingDrugs is encouraging people to share their pictures of the billboards with us, so please take a picture and tag @TalkingDrugs and @Release_drugs and we will share it on our socials, a list of the locations can be found below: