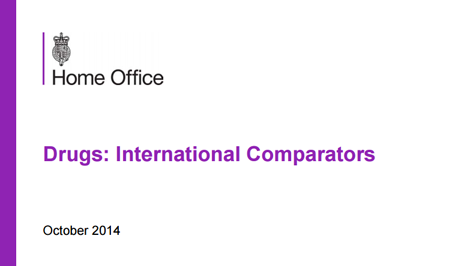 I feel it only fair to acknowledge and welcome the forward-thinking approach taken in this Home Office report – the first of its kind for over 40 years. It is for this reason that the absence of any firm recommendations; along with the irresponsible response from the Prime Minister, is nothing short of disappointing. Despite a strong analysis of drug policy on a European scale, a more thorough analysis of the UK situation is needed. Therefore, this paper will critically focus on three of the policy and operational responses to drugs, as set out in this ‘fact-finding’ report. As, whilst there are many positive (if not well-worn) points made, the report is often contradictory, one-dimensional and regularly lacks rigor.

The lack of comprehensiveness comes as no surprise, with the Foreword affirming that the government will “continue to pursue a balanced, evidence-based approach to the misuse of drugs”, due to the ‘flexibility’ of its 40 year old, governing Act. This is the same 1971 Misuse of Drugs Act that the House of Commons Science & Technology Committee deemed “not fit for purpose” in 2006, instead advocating for a more scientifically-based scale of harm.

Drug consumptions (DCR) are facilities into which drug users can bring their own drugs for consumption under supervision in a clinical, hygienic setting, away from public spaces. There are approximately 90 DCRs across Europe, and the report generally acknowledges the successfulness of these “locally-led approaches to local problems” - often expressed as the public visibility of drug use.

Thus, for the report to claim that the “UK does not experience” such open drug scenes, not only jumps to untenable societal conclusions, it ignores the objective of DCRs as a harm reduction measure. Further key harm reduction points - such as DCRs acting as a vital referral point to further harm reduction services, and overdose survival due to on-site supervision, - are also too easily overlooked in this report.

Whilst it is true that a vast amount of input is needed between medical staff, local population and the police in areas where DCRs are operational – not to mention the issue of their illegality – this does not warrant the dismissal of such an effective harm reduction initiative in the UK. Greater flexibility or exceptions should be made for those using and working at the centre, as well as for the local community, in order to allow for the greatest successes.

Heroin Assisted Treatment (HAT) is the provision of injectable diamorphine (pure heroin) under medical supervision. It is increasingly widespread internationally as part of the treatment of opiate dependency and is typically only used in the treatment of deeply entrenched users for whom opioid substitution has been ineffective. Whilst the prescription of diamorphine remains a legal option in the UK, it is not common. This is regardless of the Randomised Injectable Opioid Treatment Trial (RIOTT) here in the UK, which showed that those given supervised diamorphine injections used street heroin at a significantly lower rate when compared to those given oral methadone.

Despite this method of treatment proving to significantly reduce illicit drug use, criminal behaviour and improve physical and psychological health and social functioning, reluctance has always been attributed to the cost implications. It was therefore infuriating to see the report further establish that “any benefits to society due to re-offending will need to be sizable to offset the significant extra cost”. With mounting evidence, such as lower associated hepatitis C incidences for people who inject drugs (PWID), it is disappointing to see cost trumping public health once again.

Decriminalising the Possession of Drugs for Personal Use v. Punitive Drug Laws

Decriminalisation is defined as “the removal of sanctions under the criminal law, with optional use of administrative sanctions” – for example, the provision of civil fines or court-ordered therapeutic responses. Under this regime, the possession of small amounts of drugs are still unlawful but not subject to a criminal justice response. There are currently approximately 30 countries and jurisdictions which have adopted some form of decriminalisation policy, with Portugal the first to decriminalise possession of all drugs back in 2001.

A key finding from the report is the on the evidence surrounding a lack of “correlation between the ‘toughness’ of a country’s approach and the prevalence of adult drug use’. This isn’t restricted to the overall policy, and can clearly be seen in relation to the reclassification of cannabis here in the UK, prompting the government’s own Home Affairs Select Committee to note that “the classification of a drug may have little effect on the prevalence of its use”. This goes some way to illustrate that any legal framework surrounding drugs – whether criminal or civil – has no impact on incidence of use, with the harms of criminalisation therefore needlessly burdening society.

It was encouraging to see acknowledgment of the clear benefits decriminalisation has had in Portugal since 2001. Considerable improvements in the indicators of health outcomes such as a significant reduction in the number of new diagnoses of HIV and AIDS among drug users, is a crucial harm reduction outcome. The report's reflection that “it is difficult to disentangle the effect of decriminalisation from wider improvements in harm reduction during this same period” shows a lack of insight on the issue. This result is best explained as a displacement of resources which is characteristic of moving from a criminal justice based approach towards that of a health-focused model - a development that is recognised as being in conjunction with the decriminalisation model, not separate.

The Prime Minister’s response to the report was at best troubling. To declare that “what we are doing is working” and that he therefore does not “believe in decriminalising drugs” is irresponsible, and frankly inaccurate.

Whilst Cameron is correct at pointing out that drug use is in decline, he fails to mention the 21% increase in drug deaths last year alone; a figure that rose to 32% for heroin/morphine. Whilst the Office for National Statistics (ONS) asserted an increase in purity levels was responsible for this rise, other arguments suggest that change to service provisions might provide a more accurate answer. Such arguments are supported by Release’s own helpline, with a recent increase in numbers of calls in about drug service exclusions, cessation of maintenance prescriptions, and forced reduction regimes. This is hardly evidence of a policy regime that is working!

With his refusal to welcome the decriminalisation of drugs – despite the mounting evidence – the Prime Minister runs the risk of creating more harm rather than sending out a “dangerous message”. In 2013, 70,000 were criminalised for possession of drugs alone, with over 1,100 sent to prison. Harms resulting from a criminal record can have a long-lasting negative impact on an individual’s future employment prospects, educational aspirations, and their ability to travel. With this in mind, Release is of the opinion that no one should receive a criminal record for the simple possession of drugs.

Overall, Release welcomes the publication of the International Comparator report, signifying a willingness within the Coalition government to engage in the drugs policy debate. However, drugs policy is complicated, and we need more than just simplistic messaging to really tackle the harms that drugs can cause. What we need is reform. At a time when 71% of the public think that the current criminal justice approach has failed; it is disappointing to see the Prime Minister continue to preserve the law enforcement-led rhetoric of the 40 year old Misuse of Drugs Act. So, whilst we have finally engaged in an intelligent debate on the issue, intelligent policy outcomes are still yet to be seen.