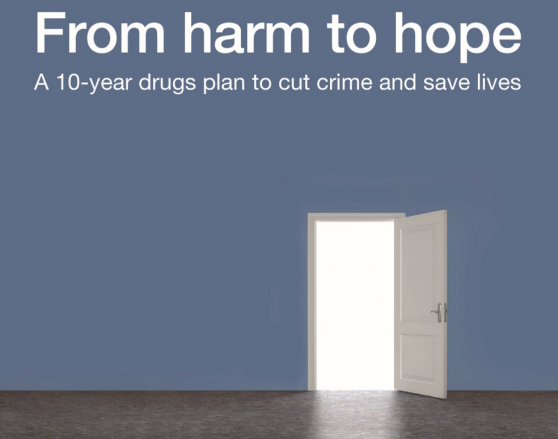 On Monday, the UK Government released their 10-year Drug Strategy entitled: “Harm to Hope: a 10-year drugs plan to cut crime and save lives”. The strategy outlines three main priorities for the next decade:

The strategy rightly recognises that half of people dependent on opiates and crack cocaine are not in treatment, and that drug addiction co-occurs with a range of health inequalities, especially mental health issues, homelessness, and deprivation. An additional investment of nearly £900 million is promised over the next three years to “deliver 54,500 more treatment places, prevent nearly 1,000 deaths, and close over 2,000 more county lines”, with £780 million of this total amount being spent on drug treatment and recovery support over the next three years.

Investment in improving the quality and capacity of treatment, as recommended in Dame Carol Black’s independent review, is long overdue following the decade of spending cuts to treatment services. The renewed focus on recovery is both welcome yet ironic given that cuts to funding were originally championed by the incumbent Conservative government, as the Advisory Council on the Misuse of Drugs (ACMD) noted in 2017. Its impact is also diluted by the strategy’s focus on punishment; a contradiction in terms given that the threat of punishment, and stigmatisation, undermine treatment efforts and prevent people seeking treatment for their drug use, should they want it, in the first place. The strategy proposes to increase punishment for people who supply drugs, and for “lifestyle users” - people who use drugs recreationally - and leaves us in little doubt that we are still in a failed war on drugs.

We are pleased to see naloxone recognised in the strategy as a life-saving and harm-reducing intervention to be offered across the country. Unfortunately, this is only one of many types of tried and tested harm reduction measures that have been implemented by nations more progressive than ours - including heroin assisted treatment, drug consumption rooms (overdose prevention sites/supervised injecting facilities) or medical safe-supply of drugs, including prescribed diamorphine - which are not even mentioned in the new strategy. The government is aware of the evidence that these initiatives not only save lives, but can promote entry into treatment and employment, facilitate other health interventions and social integration, and can reduce offending. We know that the government is aware of these options as they were recommended by the ACMD in 2016 (the government’s expert advisory council), and are included in the Department of Health and Social Care’s 2017 Clinical Guidelines.

These notable omissions from the strategy threaten the government’s ambitious aim to establish a “world-leading evidence base” around the drivers of drug use. There is little to indicate that the government will listen to the evidence gathered, given that evidence has been ignored from: (1) the ACMD on the reclassification of drugs and measures to reduce opioid-related deaths; (2) the Home Office, whose research found no relationship between the toughness of drug sanctions and levels of drug use; and (3) the United Nations (UN) and World Health Organization (WHO), who both advocate for drug decriminalisation.

The focus on targeting those who supply drugs has not only been acknowledged by the Home Office as doing little to impact the availability of drugs, but it will also continue to harm communities that are already over-policed in the UK. A lynchpin of the new strategy, ‘county lines’, is being framed as an altogether new phenomenon that facilitates the supply of mostly heroin and crack cocaine into non-metropolitan areas, even though heroin and crack markets in these areas already existed. Those that have studied county lines have shown that the entry of drugs into rural areas, sometimes via the involvement of young people, is no new feature of an unregulated drug market. It is also the case that for some young people, they will not be involved in the drugs market due to exploitation, but rather they will choose to engage in the market because of limited life choices and opportunities. Whilst there are certainly human abuses conducted by organised crime, the reality of the situation is being overstated and used to justify the nation-wide “crackdown” on drugs. There is a real danger that this line of reasoning will do more to fuel the injustice of racial disparities in the sentencing of these offences. Pursuing drug supply will also lead to more drug law enforcement on top of the 24% increase in stop and search under the main police powers that we witnessed during the coronavirus pandemic - when we were meant to be keeping our distance. Increased enforcement is expected to target those that engage in low-level supply and people who use drugs, and it will continue the disproportionate and unjustified targeting of Black and Brown people.

There is a proportion of people who use drugs problematically who will hopefully benefit from the strategy’s focus on recovery and increased funding for ancillary support services; the caveat being that ‘recovery’ must include a full range of treatments, and should not be forced on people via threats of harsher punishment if treatment is refused. Whilst there is ample detail on how the government is looking to condemn drug use and restrict the supply of drugs, there is a comparative lack of detail in the strategy on the welcomed investments in critical social services, such as housing support options, which are essential to improve the recovery outcomes for people in treatment. For example, Release advocates for the development of a Housing First policy, providing support to people who are dependent on drugs and, in turn, benefitting whole communities. In recognising that abstinence is not the only successful outcome of treatment, it must also not be a requirement to access stable accommodation. There should be no requirement to be abstinent in order to access or retain housing, otherwise any long-term resolution is destined to fail.

Within the strategy, the Conservative Government has declared that any sort of drug use is a crime that ruins lives, and is preventing the country from ‘levelling up’. Scapegoating people who use drugs for the government’s policy failings is disappointing and contradicts their messaging that people in recovery should be supported when they’re to be shamed for using drugs in the first place. A renewed focus on targeting “lifestyle users” is a draconian tactic, which we know will be an expensive, futile, and harmful pursuit as the Home Office’s own research concludes that the toughness of a country’s drug sanctions does not correspond to the levels of drug use. The vast majority of people who use drugs do so ‘recreationally’, that is, without experiencing problematic use (9 in 10), and we should not be pursuing more punishment for more people.

Very early on in its text, the strategy dismisses decriminalisation, reducing it to an often suggested “simple solution” that would “leave organised criminals in control while risking an increase in drug use.” Unfortunately such a statement ignores the fact that the current strategy will leave drug markets in the hands of organised crime, and is ignorant of evidence from the now over 30 countries that have ended criminal sanctions for drug possession. Release has published multiple resources on how drug decriminalisation, when done correctly, can improve health outcomes, reduce drug-related deaths, reduce offending, and incur minimal increases in drug use - the exact targets of the current government drug strategy.

What is more difficult to spot among the ‘tough on drugs’ fanfare is that there are some positive steps included in the strategy which move us away from the criminalisation of low-level drug possession. Diversion schemes currently operate in a small handful of police forces, and their inception has been police-led, in the absence of government leadership. Diversion schemes are considered de-facto decriminalisation - but they are not described this way in the new drug strategy - which includes plans to double “out-of-court disposal schemes” by the end of 2024/25. It is telling that the expansion of drug diversion was downplayed in the strategy: instead of being celebrated as a step towards avoiding creating criminal records for people, the government’s “tough” rhetoric was reinforced by including the underdeveloped threats to remove people’s passports and driving licenses as possible civil sanctions under diversion schemes (which is to be further elaborated in a white paper in 2022). It is an imbalanced proposition considering that current diversion schemes inform people of the harms of drugs via short drug awareness courses, as opposed to restricting their liberties.

The government has made their point: they are still tough on drugs. The UK has been ‘tough on drugs’ for over 50 years and as a result we have the highest drug-related death rates nationally since records began and the highest drug-death rates in Europe; a failure to stop new and potentially lethal synthetic drug analogues from emerging in an unregulated market; and criminal records for tens of thousands of people who use drugs each year - limiting people’s futures and disproportionately impacting people from lower income areas and people from Black and Brown communities.

Prime Minister Boris Johnson ends his strategy’s foreword with: “we cannot allow the impression to be given that occasional drug use is acceptable”, blaming illegal drug use for blighting communities and holding them back from “levelling up”. The strategy unfortunately has returned to an out-dated and moralistic goal of a “drug-free society” - an objective that even the UN recognises is impossible. In a time where countries across the world are opting to explore progressive policies with fewer human, health and justice costs, the UK doubling down on prohibition will cause the nation to lag further behind its neighbours.