Uruguay Removes the First Brick in the Wall of Prohibition 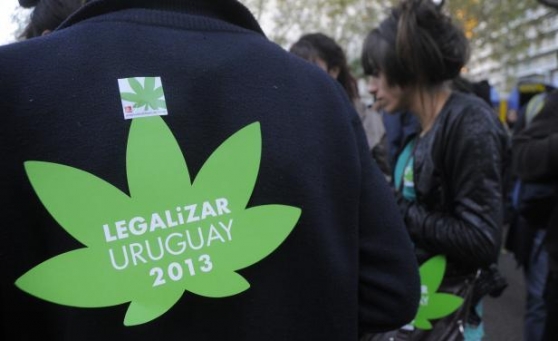 While the ‘War on Drugs’ has caused chaos across the globe, perhaps in no region has the weight of the prohibition fallen heavier than in Latin America. This is due to the orientation of international law on controlled drugs, which by placing its emphasis on the production and supply has, in the manner described by Historian William B. McAllister, disproportionately affected those at the lower end of the drug trade. By turn of the millennium, as drug-related violence became common place from Bogotá to Buenos Aires, the narco-trafficante became one of those lazy stereotypical images seen as synonymous with the region at large.

Of course, too often the Latin America’s narco-crisis would be presented devoid of any examination of the line of causation between attempts to enforce a strong prohibitionist regulatory framework and a resultant upsurge in violence. Instead, the drug related violence, which has, for example, cost the lives of 60,000 in Mexico since late 2006, was seen as an unfortunate expense of our attempts to achieve ‘a drug-free world’; the only fitting response to violence was to double down on prohibition (perhaps implement a U.S. sponsored counter-narcotics programme à la Plan Colombia.)

These times, they are changing

However, with the second decade of the 21st century has come a significant shift in Latin America drug policy as a region has started to use its growing political and economic autonomy to revisit its methods of tackling the drugs trade. First there was a group of ex-presidents, Ernesto Zedillo of Mexico, Cesar Gaviria of Colombia and Fernando Henrique Cardoso of Brazil, who publically called for decriminalisation.  Then current Guatemalan President Otto Pérez Molina  spoke out in favour of ending prohibition and Colombian President Juan Manuel Santos said explicitly, “It is time to think again about the war on drugs” And now the little nation of Uruguay has stolen a march by enshrining in law  a model of strict cannabis regulation that currently sits at vanguard of the ‘quiet revolution’, the global shift towards more progressive drug-policy frameworks

Last week’s vote in the Montevideo Senate established a new law that will allow registered Uruguayans over 18 to buy up to 40g of cannabis a month from licensed pharmacies. In addition to this, should citizens of Uruguay wish to cultivate cannabis themselves, a central body, the National Institute for Cannabis Regulation, will provide them with marijuana seeds and ensure that their crop does not exceed the legal limit of 480g per year. This paradigm of cannabis regulation is unique in that it aims at legally controlling not only the use of, but also the production, distribution and sale of the drug.

What can we learn from Uruguay?

In the UK, where the battle for drug policy reform currently aims at achieving decriminalisation, what can be learned from the Uruguayan example is the difference that can be achieved simply with principled political will. What is interesting about the implementation of this law in Uruguay is that that those working for drug policy reform achieved their goal without canvassing overwhelming public support. A recent survey conducted by Equipos Consultores, a polling group, suggested that 58% of Uruguayans opposed the law, which is unsurprising considering pro-prohibitionist rhetoric has been ubiquitous for the past half a century. Yet Uruguayan President Jose Mujica allowed his drug policy to be crafted by reason and evidence as opposed to ideology, despite the expected public hesitancy to such a significant change in tact.

Now, there have been signs of the British political class starting to become open to drug policy reform. The most high-profile statement came from Deputy Prime Minister Nick Clegg who backed calls for a royal commission to consider a more sensible drug policy. Of course, Mr Clegg’s history of sticking to his principles in the face of political pressure is not the most encouraging though.

Also, we must not minimize the differences between the UK and Uruguay in terms of both politics and drug policy reform. As aforementioned, the Uruguayan Cannabis law can be seen to be a culmination of Latin America as a region moving away from a prohibitionist framework. This general movement has emerged alongside what has been described as the Pink Tide sweeping across Latin America, the wave of leftist governments who have gained power across the continent recently. Ex-Guerrilla fighter Mujica is example of this political archetype unimaginable in the UK. Also, Uruguay has a different history of drug policy, with cannabis use being legal there for decades now. Furthermore, as a relatively small nation, that is not as reliant on foreign aid as some of its neighbours, Uruguay’s geopolitical position allows it to take this dramatic step in a way that other Latin American countries or the UK would find difficult.

Finally, the idea that the UK even has something to learn from Uruguay would also require a change in perspective from our political class at large. The self-image of the West is reliant on a presumption the nations of Europe and North America form the apex of democratic nations built on individual liberty. The idea that in relation to progressive drug policy these nations have been lapped by Uruguay may be unpalatable to some but it doesn’t make it any less true.

What now is to become of Prohibition?

With this epochal decision taken by Uruguay, the investable question we all await to be answered is: how will the international prohibitionist architecture react to this first crack in the damn, this first nation-state to so nakedly contest its ideology. The UN’s International Narcotics Control Board has already declared that Uruguay has "knowingly decided to break the universally agreed and internationally endorsed treaty.” It is still to be seen what consequences, if any, may befall this country that now stands at the vanguard of legal regulation of Cannabis.

It is important to emphasise that Uruguay is not becoming a drug-free for all. It seeks to control the negative externalities that can arise from cannabis by overseeing the entire process.  It will now provide a real world example, which those who campaign against prohibition can use to counter accusations from defenders of the status quo that ideas of the legal sale of cannabis are fantastical.

President Mujica led his country into unchartered territory last week, offering an example to other politicians who are perhaps in agreement about the need for legal regulation of cannabis but carry doubts as to the feasibility of such change in law ever being realised. Presidet Mujica has shown that with a principled and courageous political leader, responding to an energized drug policy reform movement, what seemed impossible only 15 years ago can become not only possible but perhaps even unavoidable.

Drug policy reform has been going from strength to strength all over the globe recently. But in the international sphere, the concerns and demands of peoples are too often inaudible unless amplified through the megaphone of the nation-state. Therefore, it is difficult to overstate the significance of the first of the world’s sovereign countries standing up and declaring that in relation to the ‘War on Drugs’, the emperor is not wearing any clothes. In the simple words of President Mujica, “We can't close our eyes to it. Repression has failed,”