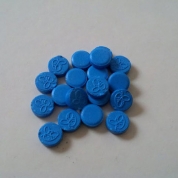 2C-B was first synthesised in the lab of the great Alexander Shulgin in 1974, with the results published in a paper with Michael Carter in 1975. In the 1980s it began to be sold as an alternative to MDMA (Ecstasy), but was quickly recognised to have interesting properties in its own right.

Shulgin continued to experiment with derivatives of the 2C base, and the numerous other letters that are linked to it have produced varying degrees of psychedelic effect. However, most have very little recorded history of human consumption and are not regularly found for sale, so it is not practical to discuss them separately in depth. 2C-T-7 (‘Blue Mystic’) is the only other to have had a notable, though brief, spell of popularity as an internet-sold drug around the turn of the millennium. It is a powerful psychedelic taken orally (snorting it creates a serious risk of overdose, and has been associated with several deaths) noted for the vivid and colourful hallucinations it can produce.