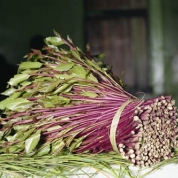 Khat has been known in Yemen for at least 1,500 years, to where it was probably introduced from Ethiopia, although this is uncertain. Arabic medical books from at least the 11th century record its healing properties and scarcity. The renowned strength and stamina of Ethiopian warriors is often attributed to their use of khat.

The use of khat spread to the Jewish population in Yemen, and the Swedish botanist Pehr Forsskal gave the first account of its use to European audiences in 1763.

Today, the use of khat is considered to be widespread in Ethiopia, Kenya and Somalia. Communities of these nations living in London have brought much of their cultural heritage with them, and the chewing of khat in communal centres (sometimes known as ‘Somali pubs’) is commonplace. Until July 2013, khat was a legal substance and there was no restriction on its import.