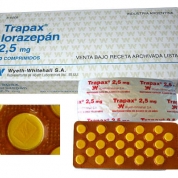 Lorazepam is one of the ‘classic’ benzodiazepines (with clonazepam, diazepam, flurazepam, etc.). It was first synthesised in the 1970s by Wyeth Pharmaceuticals, now part of Pfizer, and marketed under the brand name ‘Ativan’.

As with many of the other benzodiazepines, lorazepam has a history of recreational use, dating back to at least the 1980s. Users mostly take it for its relaxant, ‘chill-out’ effects. Due to its powerful and fast-acting nature (including amnesia and sedation-hypnosis as potential reactions), there is also some reported use of lorazepam as a ‘date rape’ drug, with people having had their drinks spiked. However, this has not been confirmed and it may be that lorazepam has been wrongly blamed when other substances (such as flunitrazepam, or rohypnol) are responsible.