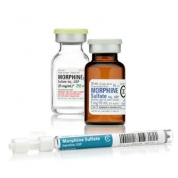 In 1803, the German pharmacist F. W. Serturner isolated and described the principal alkaloid in opium, which he named morphium after Morpheus, the Greek god of dreams. The invention of the syringe and the discovery of other alkaloids of opium soon followed: codeine in 1832 and papaverine in 1848. By the 1850s, the medicinal use of pure alkaloids, rather than crude opium preparations, was common in Europe. CR Wright first synthesised heroin from morphine in 1879, 20 years before Bayer announced its commercial product. In the United States, opium preparations became widely available in the 19th century and morphine was used extensively as a painkiller for wounded soldiers during the Civil War. The inevitable result was morphine addiction, contemporarily called the ‘Soldier's sickness/disease’or 'morphinism'. William Halsted (1852-1922), a co-founder of the Johns Hopkins medical school and the finest surgeon of his day, was a life-long 'morphinist'.