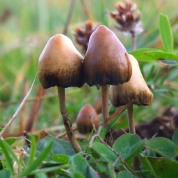 Most psilocybe mushrooms are native to the Central and Southern Americas, where they have been used for a variety of reasons, primarily shamanistic though also recreationally, for hundreds (probably thousands) of years. Europeans first encountered them when Spanish missionaries started cataloguing the religious practices of Central and South American tribes. Their popularity increased after the author and botanist Robert Gordon Wasson published his account of his experiments (including his own experiences) with the mushrooms. Psilocybin and psilocin were isolated as the active hallucinogenic ingredients in the 1960s, and they were controlled under the Misuse of Drugs Act 1971.

Fly Agaric (amanita muscaria) is found in the Northern hemisphere, and is known in both the Old and New Worlds- it has been used as a hallucinogenic by native populations from the Dogrib Athabascan of the Mackenzie Mountains in north-western Canada, to the Koryak of Siberia, and from north India to Finland.