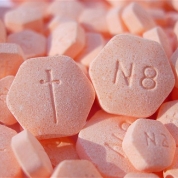 Buprenorphine is a semi-synthetic opioid that is used to treat opioid addiction in dosages (2-32 mg).

It is available in a variety of formulations: Subutex, Suboxone (buprenorphine HCl and naloxone HCl; sub-lingual tablets used for opioid addiction), Temgesic (sublingual tablets for moderate to severe pain), and transdermal preparations used for complex addiction and chronic pain difficulties.). There are a range of colours and shapes depending on the manufacturer but they are usually white/off-white ovals or yellowy/orange hexagons with the mg strength in buprenorphine (N2, N8) scored on one side and a sword on the other. Generic variations have begun to appear internationally.

Subutex sub-lingual tablets are available in the UK at 400 micrograms, 2 milligrams or 8 milligrams (mg) The usual dose is around 12 mg, usually once daily. Dose can vary between 2–32mg a day. Subutex tablets are placed beneath the tongue, where they are absorbed directly into the blood-stream via the membrane.

Suboxone contains buprenorphine as well as the opioid antagonist naloxone to deter the abuse of tablets by crushing and snorting, smoking or intravenous injection. Even though controlled trials in human subjects suggest that buprenorphine and naloxone at a 4:1 ratio will produce unpleasant withdrawal symptoms if taken intravenously by patients who are addicted to opioids. In cost and prescribing terms the ceiling dose is a plus for treatment providers. Although initially one of the main selling points was that as it had a reduced potential for abuse/overdose patients would be able to collect weekly or twice weekly, virtually every service regards this a privilege and some insist on daily collection indefinitely (bar Sunday). The dose is the same as Subutex.

Buprenorphine is also available as Temgesic, small, white round tablets of 0.2 or 0.4 mg, again they are designed to dissolve under the tongue, but not licensed for use in drug dependence. As for injectables, buprenorphine is available as an ampoule (300 micrograms/mL), but this is very rarely seen. More of a concern is the crushing and injecting of Temgesic. This has historically been a regional issue, relevant in Scotland and Northeast England, very rare in London or the south of England, where heroin or more popular opioids are widely available. They are disproportionately popular in prisons as an 8 mg tablet can be shared by as many as four opiate naïve users or ex/occasional users who have no current tolerance.

The main advantages with Subutex/Suboxone as a treatment drug are its relative lack of euphoric action and its greatly reduced overdose potential. Properly managed withdrawal is also said to be less severe. Buprenorphine is proving effective as both maintenance and a detox option for people considering giving up heroin, there is mounting evidence that it may be at least as effective as methadone in community based detoxification programmes. It also seems to be less implicated than pure opiate agonists in the use of other drugs (such as heroin and cocaine) while in treatment.

In addition are its blockade effect with opiates, its relatively long half-life, the option of sub-lingual and transdermal application and the excellent safety profile (ceiling effect for respiratory depression, lack of immuno-suppressive effect, low pharmacokinetic interaction potential). It is also possible to liaise with the DVLA and retain a driving licence, with written support from the prescriber.