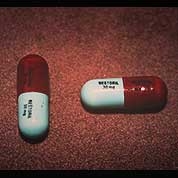 Temazepam was first synthesised in the mid-1960s, but its potential use for treating sleep disorders was not fully appreciated until the early 1970s.

In the 1980s, temazepam became one of the most widely used prescription drugs in the UK for recreational purposes. Following a series of deaths linked to the substance (though probably actually due to its interactions with other substances commonly used alongside it, such as alcohol and heroin) the recreational use of temazepam was considered a serious and growing problem.

Prescribed temazepam is currently available through the NHS in a generic (unbranded) form. However, different manufacturers may use their own initials/logos on the products, and some illicit manufacturers may attempt to mimic these in order to make their product appear ‘legitimate’. In the US, temazepam is best known under the brand name ‘Restoril’, and some capsules bearing this name have been found on the streets in the UK.