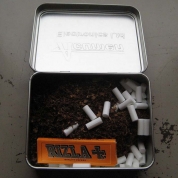 Tobacco has a very long history with its consumption and use. It was originally used in the Americas, and was first brought to Europe after Columbus’s 1492 voyage, but at first, it was not available to all people, only very few had the opportunity to become addicted to this plant.

Fast forward to 1881, after the labour force changed from slavery to sharecropping, the first sight of cigarette industrialization occurred. James Bonsack had developed a new machine that rolled cigarettes around 13 times faster than a human cigarette roller. This helped increase cigarette use dramatically.

It was not until 1964, when a report was filed by Surgeon General Luther Terry, that people became aware that cigarette smoking had a direct link to lung cancer, heart disease and emphysema. In 2004 another report was published, by Richard H. Carmona, 40 years after his first report on smoking, that smoking can cause diseases in nearly every organ in the body because cigarette smoke goes everywhere the blood flows.