The Psychoactive Substances Act came into force on 26th May, 2016. We have compiled a comprehensive and easy-to-read guide to offences contained within the legislation. Click the PDF link at the bottom of the page to read the full guidance, and don't hesitate to contact our legal team should you have any queries.

Any substance that has a psychoactive effect is banned, but certain items are exempt, including:

Under the Act, possession for personal use is not an offence, but the following activities are: 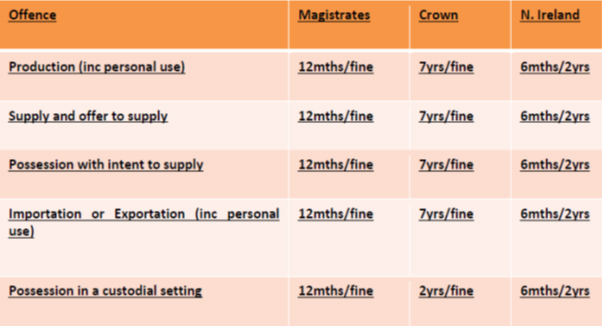 Producers and suppliers might be given one of the following to stop them doing certain activities, without being convicted of a criminal offence:

Orders can last for up to three years. Breach of an Order is a criminal offence punishable by a prison sentence of up to two years, an unlimited fine, or both.

For all offences, the prosecution will have to prove that a substance is psychoactive, something that we believe will be very difficult in Court. For some substances there will already be lots of evidence about their effects that will be used, but others will need careful testing. For others, testing won’t prove much and other evidence, including witness statements about your behaviour, will be used. Guidance from the Home Office shows that part of the testing will be looking at the way the PS acts/reacts compared to similar drugs controlled under the MDA. However, Release is of the view that it will be difficult for the Prosecution to prove the full definition of psychoactivity as they will have to show that the substance affected ‘mental functioning or emotional state’.

Because this is a new law it is hard to say what will happen until some cases come to Court – we will be keeping an eye on this and updating our Guidance when needed.

In the meantime, you might want to plead not guilty and make the prosecution prove the psychoactivity of a substance. This is your right but remember there are risks involved if you are subsequently found guilty of the offence, the main one being a longer sentence than if you had pleaded guilty early on.

If you do want to challenge a prosecution or discuss a potential prosecution please call our helpline for specific legal advice – 0207 324 2989.