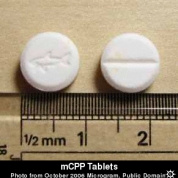 The piperazines are a large group of chemicals. The focus here will be on the recreationally used derivatives, that is the benzylpiperazines (i.e.BZP) and the methylenedioxy derivatives (e.g. TFMPP, mCPP, MeOPP), the latter being most similar to MDMA as its name suggests.

There is very little pharmacological research on this group currently, and most of the studies that do exist look predominantly at BZP, TFMPP, mCPP as these are the most commonly used substances.
mCPP interacts with a wider array of receptors and transmitters,  mainly serotonin, adrenaline and dopamine. This is why the euphoric and hallucinogenic effects are seen to be similar to MDMA. mCPP may also cause serotonin syndrome (see Harm Reduction). This is a very high level of serotonin build-up which causes the user to experience fever-like symptoms and can sometimes be fatal.