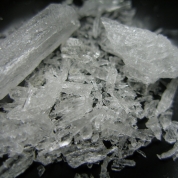 Methamphetamine (as distinct from amphetamine) was first synthesised from ephedrine by the Japanese scientist Nagai Nagayoshi in 1893. However, it was not until 1919 that another Japanese scientist, Akira Ogata, managed to synthesise it in the crystalline form in which it is most commonly known today.

During the Second World War, amphetamine and dextroamphetamine (UK and US) and methamphetamine (Germany and Japan) were all used extensively to give greater stamina and tolerance to the psychological traumas of warfare to soldiers. It is reputed that as many as 40 million tablets of Pervitin and Isofan (both containing methamphetamine) were deployed to German troops and airmen during the Blitzkrieg of 1939-41. Methamphetamine was given to US troops serving in the Korean War (1950-3).

During the 1960s, as ever more substances were restricted in the US, production of methamphetamine began to go underground, and was increasingly used recreationally as ‘crystal meth’. This trend quickly spread to the UK and Europe, and the smoking of it gained popularity in the 1980s, although the incidence of injecting has also increased due to the faster acting and more intense effects.