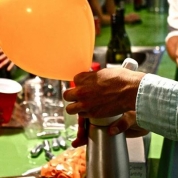 Heart failure – gas or solvent use may stop the heart instantly or cause it to beat irregularly. Sudden exercise after inhaling solvents increases the risk of heart failure.

Suffocation and asphyxiation - when volatile substances are used in an enclosed space, there is a risk of suffocation due to lack of oxygen, especially if the user becomes unconscious. When users place their whole head in a bag containing a volatile substance, they incur a high risk of suffocation. If inhaling from a balloon, it is important not to take too big a breath in one go, as this can overwhelm you and make you lightheaded. Keep an eye on how much friends are taking too.

Choking on vomit, especially when unconscious, is another significant risk. Accumulating the amount you use, particularly if you are by yourself, increases the risk. In any peer group, particularly one where party drugs are regularly used, it is important to have people trained in basic first aid awareness.

Accidental injuries – users may become confused and disorientated. This creates a risk of accidents such as falling or drowning, and loss of spatial awareness which can result in poor decision making in relation to tasks such as crossing the road. Young people may use volatile substances in dangerous environments such as car parks, construction sites, railway embankments or river sides. Such places are hazardous and may be inaccessible to emergency services.

Nitrous oxide is not physically addictive, but it is easy to get caught up in using too much when with friends, such as over a weekend long festival. Users may also feel that they cannot do without them for a few hours after stopping use. These cravings will lessen with time.