Saving Lives: Best practice guidance on the provision of naloxone 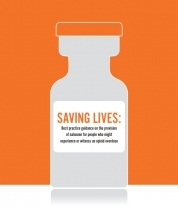 Naloxone is used to treat respiratory depression caused by opioids. Opioids produce their effects by acting on opioid receptors in the brain and nervous system. Naloxone works by blocking these opioid receptors, thus stopping opioids from acting on them. This reverses the effects of the opioid primarily in their role as CNS depressants. It is a front-line response against overdose. Naloxone may be given by injection into a vein, muscle or under the skin, or via a drip into a vein (intravenous infusion).

This guidance offers best practice for the provision of naloxone for people who might experience or witness an opioid overdose.

Building on the findings from Release’s research on naloxone in England, Release hosted the Naloxone Steering Group 2019 in April 2019, in partnership with the National Addiction Centre at King’s College London. The objective of the steering group was to get key stakeholders together for a day to discuss some of the main aspects of naloxone provision in the UK and to produce guidelines on the provision of naloxone for people who might experience or witness an opioid overdose.

Drug-related deaths are on the rise in every devolved nation and “9 out of 10 overdose deaths (89 %) in the UK involved some form of opioid”1.  Naloxone is a critical and life-saving intervention for those at risk of opioid drug poisoning. To mitigate the risk of fatal opioid overdose, we must foster an approach that is grounded in evidence and facilitates the enjoyment of human rights, with a goal of achieving the highest attainable standard of health for people who use drugs. To this end, the following overarching principles will need to be respected, if we are to achieve best practice in providing naloxone to those who might experience or witness an opioid overdose.

The steering group event was held in London on 1st April 2019, with 42 participants in attendance, from drug user activist networks, civil society, service providers, academia, pharmacy, housing, police, prison and governmental departments. Participants were invited to the steering group event to represent a range of backgrounds, expertise and UK regional perspectives. The Naloxone Steering Group Organising Committee selected participants to invite, agreed on topics to be discussed during the event and produced topic guides to inform discussions. The process adopted to develop this guidance document was as follows: