All my life, watching America. 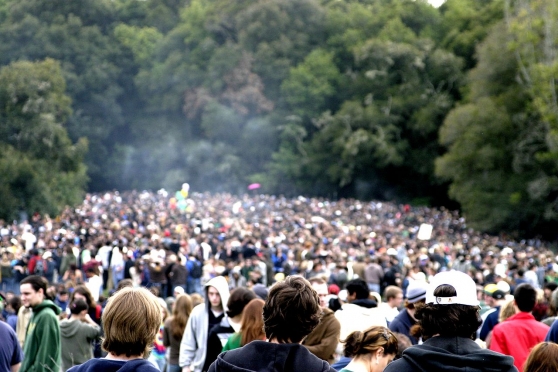 ‘All my life, watching America’.

It’s my birthday soon. April 20th to be precise. Does this date seem familiar to you? Other than my entry into the world, this date was perhaps previously best known for being Hitler’s birthday.

Unless you happen to be a paid up member of Combat 18, this date has probably taken on a much different significance in recent years. April 20th or 420 as it is commonly now known, has become a counterculture holiday, where people gather to celebrate and enjoy cannabis.

The first I ever heard of 420 was when an American girl that I was dating a few years back fell into fits of giggles upon finding out my birth date. Although there are a few different versions floating around, 420 appears to have its origins in California a few decades back. However, its popularity has increased so greatly that it’s now almost a United States (US) national holiday of sorts.

As with many things, for better or for worse, where America goes the United Kingdom (UK) is not too far behind. 420 is gaining popularity here in Britain. Last year on 420, with an impressive social media presence, the London Cannabis Club (LCC) gathered around 10,000 cannabis enthusiasts to Hyde Park.

If you were there, good for you! If you weren’t then try to imagine 10,000 people enjoying a day out in the park, getting stoned. There was a sizeable police presence, yet for the most part the police did not involve themselves. No trouble was caused, no fights broke out and no one got hurt. The weather was crap but that’s hardly surprising. Most importantly of all…the world kept turning.

Does anyone want to venture a guess how many will turn up for 420 in Hyde Park this year? More than last year I would wager.

So we already have America to thank for 420, but is it possible that America could pave the way for significant drug policy reform in the UK?

Whilst it may be some time before there is widespread social acceptance of cannabis use over here, there is an argument to be made that events in America could lead to rapid change in UK domestic cannabis policy.

I see little point in discussing the moral, social or economic reasons for ending cannabis prohibition. As far as I am concerned, that issue has been argued out and frankly, once you consider the evidence there is only one common sense conclusion.

Take a look at what is happening across the pond right now. The dominos are already falling in the US. Medical cannabis is legal in 21 states. Several more states have decriminalised cannabis possession for personal use and two states (Washington and Colorado) have passed legislation to legalise and regulate non-medical cannabis for production and supply.

This progress has all been made despite the US Federal Government maintaining its prohibition on the sale and supply of cannabis. The Federal Government is signed up to various United Nations (UN) conventions on international drug policy, one of which prohibits the sale and supply of cannabis. The US government insists that as federal law maintains this prohibition then the US is keeping up its international treaty requirements regardless of what may be happening in Washington and Colorado.

As more and more states allow medical cannabis and then non-medical cannabis to be legalised, how long can the US Government keep up this pretence? Well probably until it starts to become too embarrassing to keep up the act. If the majority of American states have cannabis for sale in one form or another it’s pretty unlikely that the Government can continue to claim that the US complies with the UN conventions with a straight face.

If the US Government were to take that step and finally amend its cannabis prohibition laws to reflect the reality of what is happening then all bets are off at that point. I think it’s fair to say that the US government doesn’t care much for UN conventions in any event (or the UN Security Council…or the International Criminal Court…or the….you get the idea). If the US flouts a UN convention then there is pretty much nothing that the UN can do about it. If America begins to ignore the UN conventions on drug prohibition then soon many other countries will too.

Just like with 420, if the US Government folds on its adherence to cannabis prohibition then it wouldn’t be that surprising if the UK were to follow suit. Although they may not admit it, there are good reasons for all the major UK political parties to consider ending cannabis prohibition.

Currently, legalising cannabis does not play well with the voters of middle England and that is why many politicians are not willing to even discuss the issue. David Cameron was once heavily in favour of drug policy reform. Well not anymore apparently.

However, Nick Clegg, with his social justice agenda, hit the front pages of the national press recently by trying to drag the issue of drug policy reform into mainstream politics. Several high profile politicians (mostly the retired ones, I have to admit) and some top-ranking police officers have also come out in support of reform. In addition, the Institute for Social and Economic Research recently estimated that a regulated cannabis market could reduce the government deficit by up to £1.25 billion a year. You know George Osborne would love to get his sticky mitts on that.

That is why we should keep our eyes focused on what is happening in the US. As it unfolds there, a different approach to prohibition could find a place on the UK political agenda. A change in America’s position on cannabis policy would make a similar change in the UK all that more palatable to voters.

America has already introduced 420 to our shores and it is being embraced by the British public. People in America are beginning to understand that the decriminalisation of drug users and the end of cannabis prohibition is a sensible and proportionate way to reduce the harm that drugs can cause to our society. Not to mention the economic gain that comes along with it.

So if you choose to enjoy 420 this year, then just have a think about our friends in the US. We may not always approve of their ideas and their actions, but by continuing on the route that it is currently following, America could well be responsible for introducing these same benefits to the UK. Now that really would be a gift worthy of the ‘Special Relationship’.