The Khat Ban: A failed solution to a non-existent problem 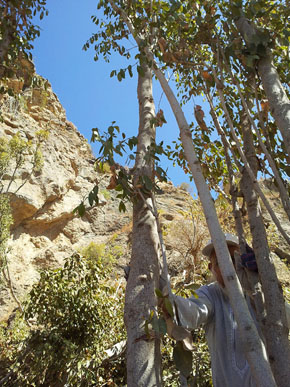 As places like Uruguay, Colorado and Washington spearhead the move away from the prohibitionist framework that dictated global drug policy, the British government remains blind to this sea-change. Instead, it continues to march in the wrong direction on this issue, doubling-down on a policy of criminalisation openly damned as a failure by people from across the political spectrum. This myopia is reflected in the government responding to legal highs by just outlawing more and more psychoactive substances, a tactic as effective as Hercules repeatedly cutting the head of the Lernaean Hydra, only to watch two grow back in its place. Now, prohibition in the UK is to be extended even further as last week,  the House of Commons voted to endorse the Home Secretary’s decision to ban khat, a herbal stimulant widely used in the countries in and around the horn of Africa and which remains popular with Somali and Yemeni immigrant communities in the UK.

This decision to make khat as a class C drug, shows that not only is the UK determined to employ the failed solution of prohibition to address the serious problems that can arise from stimulant use, prohibition will be applied even when there are not serious problems resulting from the use of a stimulant. International law does not insist on the prohibition of khat. Whilst its isolated compounds cathonine and cathine were included in the list of substances banned by the 1988 Convention, the signatories are allowed discretion in deciding whether to ban khat itself in domestic law. This is because khat was judged not to cause serious medical or social problems. The WHO Expert Committee on Drug Dependence (ECDD), confirmed in 2006, that khat use carried a low risk of harm.

'the Committee reviewed the data on khat and determined that the potential for abuse and dependence is low. The level of abuse and threat to public health is not significant enough to warrant international control. Therefore, the Committee did not recommend the scheduling of khat.’

Not only is the potential of harm low, but the stimulant is used a very few people in the UK. Only 0.2% of the general population use khat. This begs the question why would the government look to ban khat, especially when in 2011 the Home Office published a report  which stated “The social consequences of khat’s illegality […] are likely to be profound given “the criminalisation of users and sellers” and the creation of “illegal drugs markets.” The answer to this question may lie in who this 0.2% of people who use khat are.

Khat use is associated with Somali and Yemeni immigrant communities, and the fears about khat use have risen in parallel with public hysteria regarding Islamic radicalism. As the point of focus for ‘the war on terror’ drifts from the Arabian peninsula to the horn of Africa, reports in the media of the khat industry funding terrorist groups in Kenya and Somalia have begun to arise. In addition we have been inundated with scare stories about khat chewing houses in England becoming recruiting grounds for Islamic extremists. In this context, the ban on khat appears to be aimed more at the people who may use khat as opposed to the dangers of the stimulant itself. To enforce the ban is to expose the Somali and Yemeni communities to increase police surveillance, giving further licence for young males to be repeatedly stopped and searched. MP's admit this will antagonise already marginalised communities.

The idea of the UK banning khat for primarily political reasons has historical precedent. This is not the first time the British government has banned khat, just the first time within Britain itself. In 1921the British Somaliland Protectorate restricted the importation of khat as it feared khat's use was connected to Shayk Muhammad's resistance movement. David Anderson and Neil Carrier also explain how khat use was prohibited in Kenya in the 1940s as the British again felt it was dangerous to colonial rule. Both times, the ban only resulted in trade in khat becoming more lucrative and its use being associated with rebelling against British state oppression.

Unsurprisingly, the current government refuses to heed this warning from history, just as it refuses notice of the rejection of prohibition occurring across the globe. Voices of sense from within parliament such as Julian Huppert are ignored, as are Home Office reports such as 2010 report by Sykes et al. which details how the Government could, rather than legislate against khat, ‘reduce the risk of harm through a combination of measures, for example: health education and promotion; health and safety regulations; licensing and sales tax; and import quality controls.’ The decision to disregard this advice and instead persist with applying a failed solution to a non-existent problem shows the full irrationality of contemporary UK drug policy.