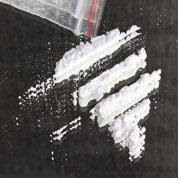 Cocaine is a drug that increases the body’s functions and reactions (stimulant). It comes from the coca plant, grown mainly in South America, and goes through a range of chemical reactions to produce cocaine.

Cocaine is a white powder, of pearly appearance in its purer forms.

Swallowed: swallowed (ingested) by ‘bombing’. A ‘bomb’ is prepared by wrapping individual doses in cigarette paper.

Injected: can be dissolved in water and injected.

Smoked: Smoking in a joint (rare as easily burns out).

Snorting or swallowing is the more gentle method of ingestion, and the onset of its effects more gradual. The onset of injected cocaine is very fast, taking only a few seconds to reach the brain, and is very intense.