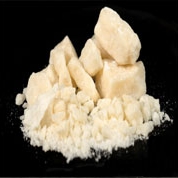 Popular names Crack is also known as ‘rock’ or ‘white’ and when mixed with heroin is known as ‘snowballs’ or ‘speedballs’
What is it?

Crack cocaine use became popular in the 1970s. Crack cocaine is another form of cocaine that is considered ‘more addictive’ as its pleasurable effects are greater than cocaine. It also differs in terms of the way it’s taken (route of administration) and time it takes to act on body (onset of effects).

Same as cocaine, but more intense:

Crack is found as white or off-white, pearly or waxen lumps.

Smoked: it is smoked (inhaled) through pipes, ran on foil or smoked in a joint

Injected: may also be injected if combined with a water and acidifier to make it water-soluble.

In either method, the drug reaches the brain very rapidly and produces an intense but short-lasting ‘rush’ followed by a 10 minute high.