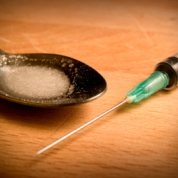 Heroin is the popular name for diamorphine. It acts as a depressant, so it slows down functions and reactions in the body and is also a strong pain killer (analgesic). Discovered in 1874, it comes from the opium poppy.

Heroin can be a highly addictive drug, producing tolerance to its effects and deep physical dependence—without it the user becomes ill and unable to function normally. It should also be noted that the drug has especially effect at reducing psychological and emotional pain, and most addicts can be accurately described as people self-medicating against traumatic memories and intolerable feelings. The time taken to become addicted varies with the individual and context, as does the severity of withdrawal symptoms. Overdose can be fatal, of course, and most overdoses are due to profound depression of the respiratory system. After many years of abundant supply at user-end purity, in the UK heroin quality now varies significantly.

While pharmaceutical heroin is white, most of the heroin available in the UK is a brownish powder.

Smoked: brown heroin is most suitable for smoking. Much illicit heroin is smoked on tin-foil (‘chasing the dragon’ or ‘booting’).

Injected: brown heroin can also be injected, but needs to be acidic to make it dissolve (vitamin C is often used). For further information on injecting, including safer methods, click here.

Snorted: bigger lumps are crushed up and powder is divided into lines and snorted (insufflated) via rolled up paper or ‘bumped’/’keyed’ i.e. small amount sniffed.