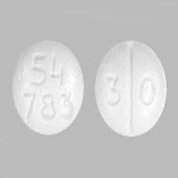 Codeine is an opiate, closely related to morphine, and comes from the opium poppy, but possesses around one fifth of the strength of morphine. It is still a very effective analgesic (pain killer). Most mild pain killers contain small quantities of codeine, e.g. co-codamol. However, the formulations are too weak to be used in the treatment of dependence, and because they contain other drugs such as paracetamol and aspirin, it may be harmful, if taken in sufficient quantity, to feel the opiate effect of codeine.

Its usual formulation is as codeine phosphate, but also as dihydrocodeine. These can come in tablet, modified release tablet, syrup/linctus and ampoule form. Tablets are usually small and white, but can appear in transparent capsule form. The liquid form appears as red/orange syrup-like substance (cough syrup).