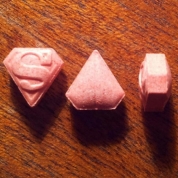 PMA/PMMA looks like, and is sold as ecstasy, but is more toxic, and in some cases fatal.

Effects are similar to those experienced with other stimulants including ecstasy and other amphetamines:

Symptoms with a higher dose include:

It is usually found in pill form, a white-ish colour, but can also be pink or yellow.

Several PMA pills have been found to have a Mitsubishi stamp imprinted on them.