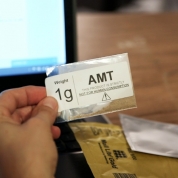 Popular names ‘Alpha’; ‘Alpha-meth’
What is it?

AMT (Alpha-methyltryptamine) is a stimulant of the tryptamine type. It was originally investigated for its anti-depressant properties, but the effects proved disappointing and it was soon abandoned. Some people take it for its stimulating effects.

Swallowed (either in wraps or capsules) or insufflated (snorted), very rarely smoked/vaped.