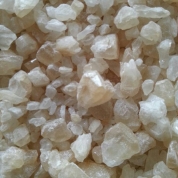 Methylone is a drug that speeds the body’s responses (stimulant) and makes people feel closer to others (entactogen). It is similar to the effects of MDMA (Ecstasy). It became a controlled drug along with mephedrone in 2010.

Was first sold in liquid form under the branding name 'explosion', but can also be found in powder form.

Snorted: the powder form is snorted or sniffed