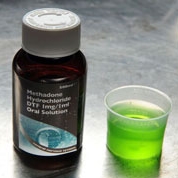 Methadone is a man-made (synthetic) form of heroin. It is a strong painkiller often used in the treatment of heroin addiction.

It is an addictive drug in its own right, producing tolerance and its own withdrawal syndrome.

It is available on the street, and usually comes in the form of a sticky green liquid; the liquid mixture is made in other colours however, and also in tablet form.

Swallowed: both the liquid and tablet forms are made for swallowing (ingesting)

Injected: ampoules for injection are produced but are prescribed to relatively few heroin users.