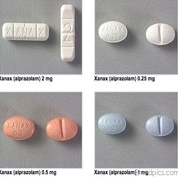 Alprazolam was one of a raft of drugs created by Dr Jackson B. Hester Jr. for the Upjohn Company (now part of Pfizer), who applied for the patent in 1969. It was granted in 1976, and alprazolam was first marketed in 1981. The patent expired in 1993, and whilst Pfizer still hold the trade name ‘Xanax’, a number of generic variants have since come on to the market. Some illegal producers of alprazolam use Xanax logos and typography in an attempt to make their product look genuine.

The recreational use of the drug has been recorded since the earliest days of its release. Its efficacy as a sedative means it has been widely prescribed, and the quick build-up of tolerance has meant many who started taking it under doctors’ guidance have been driven to obtaining it illegally in order to sustain their increased needs. As such, and as with other benzodiazepines, there is a small but specialised market in its illicit supply.